My introduction to amateur radio came in about 1957 when my father VE7AGC (SK) took me to visit John Brown VE7JB and I listened to him talking to VK’s and ZL’s on 20 meters AM. His Collins 75A4 receiver and Johnson Viking Ranger transmitter driving the Johnson Desk Kilowatt was the dream station for not only me, but the entire amateur world. I sat on the floor of his shack and looked for hours at his shoe boxes full of QSL cards and dreamed of traveling to the far corners of our world. 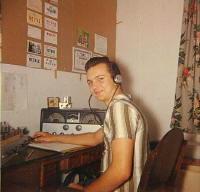 I decided then and there that I too would become a radio ham, but I did not realize that in Canada one had to be 15 years old to become licensed. So I became SWL-VE7 until in 1960 on my 15th birthday I wrote the amateur exam and became VE7BFN.

I was fortunate to have many Elmers in my formative years. VE7APH, VE7PY, VE7BC and  VE7HE plus many others who all guided me down what was a short path first to DX’ing and later to contesting. My love affair with amateur radio had begun.

Upon completion of high school in 1963 I joined Pacific Western Airlines and was sent to their weather station at Contwoyto Lake, NWT. Upon my arrival I sat down at the existing station of VE8RG (now VE7IG) to work a little DX. I did not get up until working DXCC in one sitting as VE7BFN/VE8. I soon became VE8AA and was active daily. It was during this time that some lifelong radio friendships began. Daily contacts with UK5MAF (now K6WG), OH2BH, K6LOM (now N6EJ), SM5SB (now a SK) were the norm and we chatted for hours about every subject that came into our young heads. Little did

we realize how our lives would cross paths again and again during the years to come.

In 1968 I left the Arctic to return to civilization and exchanged VE8AA for VE7SV. The

lure of the north was strong and in 1973 I returned once again to the NWT as VE8RR for a few years.

By now I had dreams of being a contester and I was recruited by W7RM as one of his young guns. Thanks Rush. Many contests operating together with K7SS, K7RA(sk), K7QQ, K7JA, W7XR, K7CW, KE7V etc. soon taught us all the value of teamwork, friendship and what it meant to be winners. Myself and many of this group operated together with Carl Cook AI6V from Aruba as P40V in 1988 to establish new world records in the CQWW multi-multi category, both SSB and CW.

By now I was dreaming of having my own contest station and with the support of my wife Martha we purchased an acreage on Mt. Thom near Chilliwack, BC. The towers went up before the cabin, and today the signal of VE7SV continues to be heard in most major contests with the support of VE7AHA, VE7CC, VE7AG, VE7CT, VE7BZ and others.

My greatest thrill has been to participate in the WRTC (World Radio Team Championships) representing Canada. You may recall working me as:

Follow these links to see the people I have the pleasure to meet along the way as I travel:

My story would not be complete without recognizing the tremendous support I received from father Earl, VE7AGC/VA7UA (SK) over the years. Even though his key is now silent, my memories of him are strong and they fuel my passion for our hobby…thanks Dad.... Dale